Early next year I am off to China for several months. I hope to see a lot of the real China, as well as the usual tourist hot spots that I have wanted to see for ages, e.g. Terracotta Soldiers in Xi’an. Due to the packs of dogs that run wild at night in some Chinese towns, I have had to have the first of three rabies injections. It knocked me for six over Christmas. My Christmas Eve night was spent shivering in my bed whilst wearing full pyjamas, a hoodie with the hood up under my duvet with the heating on. My bones were physically freezing. I felt better after 24 hours, but alas I did not get to see Santa drop off my presents which usefully involved thermal gear for the trip.

Our first point of call is the Ice Festival in Harbin. This time of year Harbin is an AVERAGE -25oC. Yes that’s Average. However such freezing temperatures allow for one of the greatest shows on Earth. Apparently it has to be seen to be believed and I cannot wait to see it. 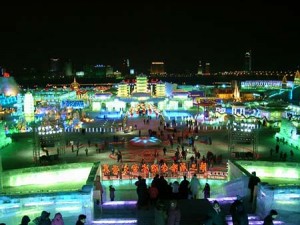 They build an entire city out of ice. They use both traditional methods as well as laser and chainsaw cutting. It will be one of the first and biggest highlights of the trip. I just hope that feeling of cold from the rabies does not reappear once in Harbin.

My Chinese Visa is currently being processed which I found out is an expensive process for UK citizens looking for a multiple entry visa. With all the fees etc it is just under £100. And that is with going direct to the embassy and not through an agent. Either way it’s worth it as it will be an experience of a lifetime. I have been to Hong Kong and Macau before, but never the mainland. I imagine Hong Kong is a good way to gently get you used to China. It has all the Chinese signs and people but it also has the British influence so many people and businesses speak English. Same with Macau, however its Portuguese. Every road sign has Chinese and Portuguese. I know some Spanish so the wording is similar when written down. Being a casino based economy also means the place is setup for English visitors.

Rural China is a whole different ball game. You need to know some Chinese I have been told. Hopefully by going to the larger cities at first, will mean I can familiarise myself with the basics along with what I have learnt, which should stand me in good stead. At worst I have some good friends from Shanghai who may be receiving some phone calls.

Overall I cannot wait for China. It is such a huge and varied landscape with some of the most incredible natural landscapes in the world, a thing often overlooked. Yunnan providence looks to be a particular natural highlight. With just two more jabs to go it’s all getting very close and I can not wait to see what awaits me there.