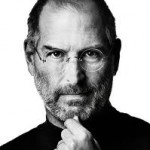 Its was done in 2005 by Steve at the Stanford University Commencement Address in California.  His talk is aimed at inspiring people to pursue their dreams and never settle.
“Stay Hungry, and Stay Foolish” – Steve Jobs